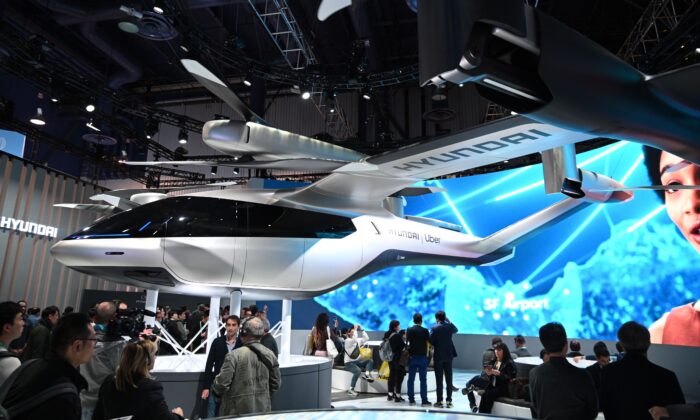 IRVINE, Calif.—Southern California residents could see flying taxis soar across the sky as early as 2028, a technology in development by a Hyundai Motor Group subdivision building the future of air mobility.

“Until recently, the concept of flying vehicles existed in our imagination, on TV shows, and in futuristic or otherworldly movies,” Diane Cooper, the Head of U.S. Policy for Supernal, the Group’s Urban Air Mobility Division, said in a statement. “Thanks to breakthrough technologies and accelerated digitalization, the concept could be a reality within the decade.”

An eVTOL, based on Hyundai’s S-A1 air taxi prototype, will hold four-to-five passengers, transport riders from Anaheim to downtown Los Angeles in less than a half-hour, and cost about the same as a luxury car service like Uber Black, according to the Orange County Business Journal.

Supernal’s plan for air taxi passengers would resemble rideshare platforms where users can request a ride for pickup and drop-off at “vertiport” locations—which the global company plans to unveil a prototype in the United Kingdom this year.

By 2024, the company plans to bring the eVTOL to market and begin certification with U.S. regulatory agencies.

“The [Federal Aviation Agency] can certify new technologies, such as flying taxis, through its existing regulations,” a Federal Aviation Agency spokesperson told The Epoch Times. “When tailoring existing rules to an applicant’s new concept, the FAA determines the certification requirements for the aircraft’s design, production, airworthiness, and operation.”

Supernal joins more than 50 other companies pioneering the next step in passenger air mobility which could contribute approximately 280,000 jobs to the United States in the Advanced Air Mobility industry by 2035, according to a Deloitte report.