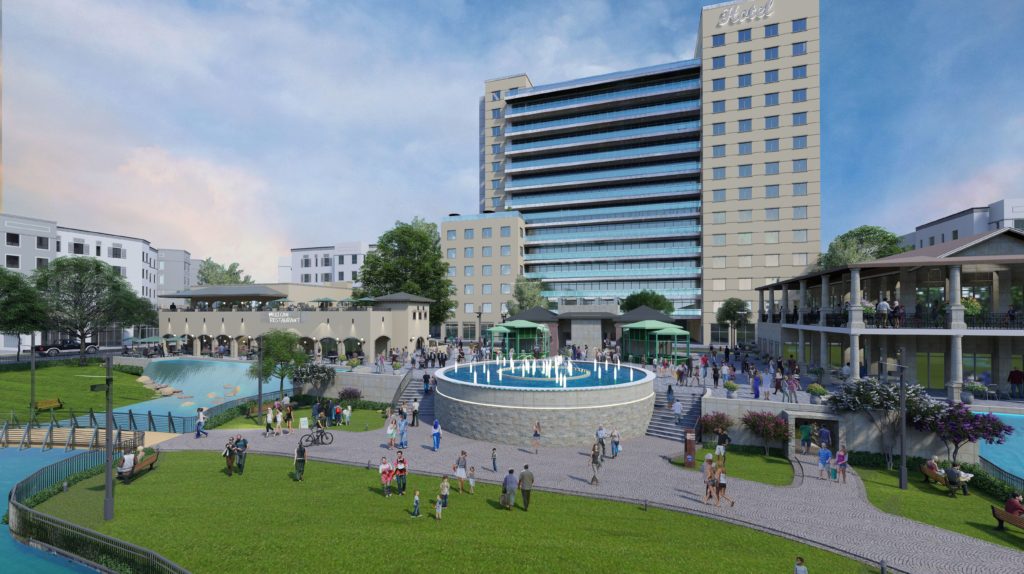 Mall to Be Demolished and Replaced With Homes, Entertainment Space, Hotel

There’s hope that the revival of the aging Collin Creek Mall in Plano, Texas, which is set to undergo a $1 billion renovation beginning this summer, will transform the area into a new corporate magnet.

The proposed mixed-use project, called Collin Creek, is expected to bring a new gateway to southeast Plano, connecting the city’s historic downtown on the eastern edges of the sprawling community totaling 72 square miles. In all, Collin Creek is expected to bring 1.3 million square feet of office space to that part of Plano, which sits in close proximity to State Farm Insurance’s regional hub that spans four buildings totaling 2.1 million square feet.

Plano, located about 18 miles north of downtown Dallas, has nearly 280,000 residents and is the ninth largest city in Texas. The city has a history of recruiting some big companies dating back to the 1980s when retailer J.C. Penney & Company Inc. traded in its New York City office for a sprawling campus on the Texas Blackland Prairies and H. Ross Perot Sr. built a corporate campus for Electronic Data Systems in the early 1990s.

In the following decades, little has changed in the pro-business city of Plano, which has landed some big corporate wins in recent years. Those wins include Toyota North American headquarters, a new regional hub for Liberty Mutual Insurance, as well as an ever-growing JPMorgan Chase hub on the western part of the Dallas suburb. Yet, the eastern edge of the city has been left largely untouched — albeit the redevelopment of a former Texas Instruments campus, which has already landed major leases with Samsung and Peloton.

“For the past 14 years, ever since I was first elected to city council, Collin Creek Mall has been dying a slow death every year,” Plano Mayor Harry LaRosiliere said in an interview. “This project will spark a lot of development that has otherwise been stagnant within this part of the city.”

The Collin Creek redevelopment will help redefine Plano’s historic downtown by connecting with it in some fashion, LaRosiliere said, adding those details are still in the works. The regional mall’s proximity to two major thoroughfares — North Central Expressway and the President George Bush Turnpike — adds to its attraction to would-be corporate tenants.

“There are very few places in Plano better situated for eyeballs and passing vehicles,” LaRosiliere said. “We feel like this has the ability to land a major employer.”

The trickle-down effects from bringing a major employer, such as the case of Toyota North America, brought ancillary businesses to the city that wouldn’t have otherwise considered the city, he said. With Toyota and other companies leasing up most of Legacy West, it’s time to look eastward toward Plano’s historic downtown, LaRosiliere said.

“There’s only one Legacy West, but we have this new Collin Creek redevelopment, which has the ability to create an urban setting with housing, retail and office space in a truly walkable downtown setting,” he added. “This will give a company the value proposition this city has to offer.”

Plano Independent School District is one of the top-ranked school districts in North Texas, according to a ranking by the Texas Education Agency. That prestigious ranking has helped boost Plano’s profile in the Dallas area region. Often, the city’s schools are credited with winning corporate business by companies seeking a good quality of life for their employees, such as the case of Toyota North America.

The developer behind the mall redevelopment, Mehrdad Moayedi, president and chief executive officer of Centurion American Development Group, plans to build thousands of pedestrian-friendly homes, ranging from single-family homes to apartments to senior living, as well as 300,000 square feet of retail space, 200,000 square feet of entertainment space, a 200-room hotel with a 40,000-square-foot event space and a lagoon-like water feature. Centurion bought the mall in December 2018 for $25 million.

“This is a valuable redevelopment project,” said Moayedi, who is best known for the $200 million-plus redo of the 1950s-era Statler Hilton Hotel Dallas in the city’s central business district. “This mall has a great location and I’m proud to work with all the homeowners to bring this quality of a project they haven’t seen in East and Central Plano.”

Unlike the redevelopment of The Statler, Moayedi said the aging mall would be difficult to modernize and is planning to start from the ground up following a demolition to build atop the Collin Creek, a waterway running underneath the paved surface of the mall. The businesses still operating in the mall are expected to close up shop by June, except J.C. Penney.

The Plano-based department store retailer plans to stay open through construction until Centurion can build a new freestanding 100,000-square-foot retail building south of the current J.C. Penney storefront. Financial terms of the deal between J.C. Penney and Centurion were not disclosed.

The move is expected to cut the retailer’s department store footprint in its home market by half, which could be a sign of things to come throughout the 117-year-old retailer’s shrinking fleet of more than 800 stores in 49 states and Puerto Rico.

This is the first time Moayedi has worked on a project so entrenched in the retail space, he said, which puts him at an advantage in the ever-changing industry.

“We haven’t done any of the old retail, so we are able to come to the project with new ideas and new perspective,” he said in an interview. “We are looking at a lot of great retailers and are looking at ways we can partner up with them.”

Michael Kennedy, a senior vice president in Avison Young’s Dallas office, and one of the brokers behind the sale of the mall, said he expects Collin Creek to add to the growing job centers along North Central Expressway, which run from Richardson’s CityLine and State Farm campus to the southeast of the site to Watters Creek in Allen to the north of Plano.

“The east side of Plano has been craving a new destination,” Kennedy said in an interview. “A lot of new office is going to happen at the Collin Creek location with re-generated retail and housing in a mixed-use urban environment. Those ingredients are what are drawing in corporate users.”

Meanwhile, the West Plano area of the region, which has a much younger stock of office buildings, is seeing average asking rent premiums of $31.88 per square foot, according to recent data. Kennedy said office space within walking distance of amenities and housing are sought after by a wide variety of companies.