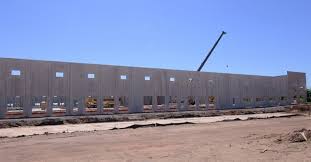 Despite the uncertainty generated by the pandemic and plummeting oil prices, the need for warehouse and distribution space has not slowed down in Oklahoma City. The region’s expanding population and employment growth have increased demand for both e-commerce and just-in-time logistics.

Amazon defined industrial activity for 2019 when it moved in its 2.56-million-square-foot fulfillment center, making it the second-largest industrial user in the market. The company currently occupies two locations totaling 2.6 million square feet of space. The company has announced several major expansions. In April, it signed a 121,700-square-foot lease at 6101 SW 44th St. and is expected to move into the facility in early 2021. In late July, Amazon filed building permits for a 1-million-square-foot sorting facility just north of the current facility at SW 89th Street and Portland Avenue.

Walmart, seeing increased demand for groceries and home goods, signed a deal to expand by 65,600 square feet in the Will Rogers Business Park, northwest of Will Rogers World Airport. Late last year, the company leased 152,800 square feet. The new lease will make Walmart the largest tenant in the complex.