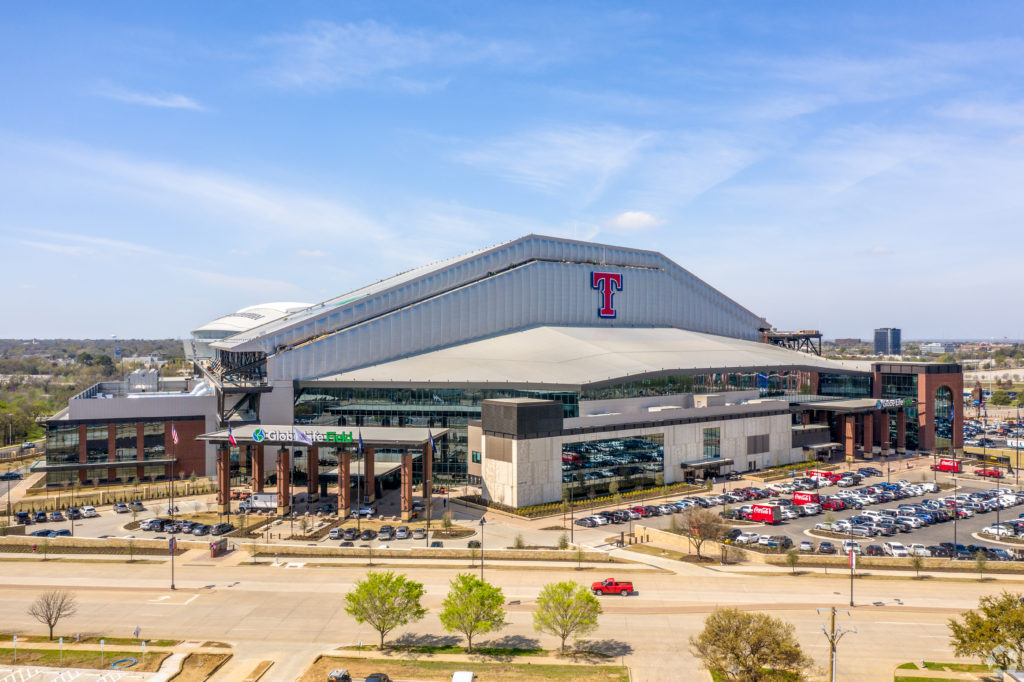 $1.2 Billion Stadium is finished and ready to open

The Texas Rangers are set to play their first home game as part of Major League Baseball’s abbreviated season in the team’s new $1.2 billion stadium, where an anticipated opening to much fanfare was delayed because of the pandemic.

Instead of 40,300 screaming baseball fans, the venue in Arlington, Texas, will host only players Friday against the Colorado Rockies because of restrictions tied to the coronavirus. Globe Life Field, a stadium with the world’s largest single-panel operable roof at 5.5 acres, was completed in less than 30 months for a planned spring opening that never happened.

The 1.8 million-square-foot venue, funded by publicly financed bonds, marks a new home for the Rangers after the team played for 25 years next door at Globe Life Park without a roof that opened or closed. The new site also has broad porch roofs to shade sidewalks from the hot Texas sun, while the main roof system shields players from the overhead glare. And the design includes an outfield that can quickly be set up as a concert stage when baseball isn’t played.

“I believe we’ll set a standard for decades to come,” said Rob Matwick, an executive vice president of ballpark operations for the Texas Rangers, in an interview. “If you look at the levels of finish in the building, I think they are second to none in baseball.”

The stadium in Arlington, a city between Fort Worth and Dallas, is another piece of the Texas Live! entertainment district. It includes the AT&T Stadium that’s home to the Dallas Cowboys football franchise, and Globe Life Park, which was recently converted into a soccer arena.

Globe Life Field was designed by Dallas-based architecture firm HKS, which also designed the Cowboys’ AT&T Stadium, a new arena for FC Leon in Mexico, a stadium for Nippon-Ham Fighters Baseball Club in Japan and the recently completed $5.5 billion SoFi Stadium in Inglewood, California, for the Los Angeles Rams.

The retractable roof in Globe Life Field will help contain the sound of cheering fans, letting the energy reverberate off the ceiling back onto the field to provide a home field advantage, Matwick said, based on the effect he’s seen in other stadiums with similar roofs.

But without fans attending the team’s 30 games at Globe Life Field as part of a 60-game season, the ballpark’s designs may go unnoticed this year. The shaded porch areas intended for fans to gather at the entry doors will shade empty sidewalks rather than people and the multi-floor concourse with a view of the field and outside the building will be a ghost town. The 47 concession stands, 20 bars and 38 portable food stands will sit empty.

Beyond the coming quiet season, the stadium is designed to be relevant a half-century from now, thanks in part to “largesse” that “could only be in Texas,” said Bryan Trubey, the global director of HKS’ sports and entertainment.

Even so, the designers wanted it to fit in to the surrounding area. The outside of the arena, with the porch-like design, was aimed at making it “feel like a real street in a real town around a real ballpark, with that, we knew we could create the kind of authenticity we were really after in the game of baseball,” Trubey added.

To give players and fans natural light, HKS designed the 240,000-square-foot retractable roof, sitting 278 feet above the field with a special HKS design feature that Trubey calls one of many of the ballpark’s “inventions.” The pillow-like design with a lightweight plastic polymer, called Ethylene Tetrafluoroethylene, along the center panel of the roof lets light through but spares players on the field from direct sunlight.

That shade could be important in more ways than just comfort for fans, Matwick said. It’s his hope the design of the ballpark could attract more star players to Texas by taking the relatively high heat of the Lone Star State off the table and keeping average temperature in the stadium in the mid-70s.

Providing that type of comfort requires a roof that weighs 24 million pounds and takes 12 minutes to open.

“We want to make an impression,” Matwick said. “I think players that wouldn’t have considered coming to play in Texas because of the heat may reconsider.”