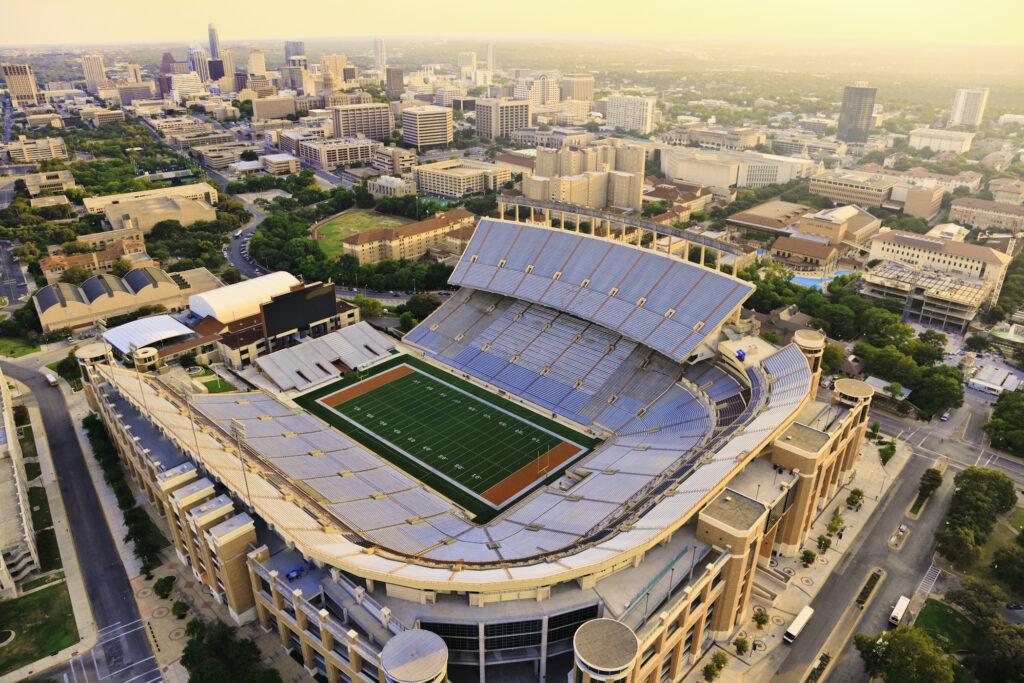 Nearly $4 Billion in CMBS Loans Could Be Threatened By Pandemic-Era Restrictions on Football Crowds.

A decision by the NCAA’s Big Ten conference to reverse course and start playing football is not likely to rescue hotels in college towns that were already struggling financially because of the coronavirus pandemic.

Several schools in the Power Five conferences, comprising the Big Ten, Atlantic Coast Conference, Big 12, Pac 12 and Southeastern Conference, are limiting capacity at stadiums, banning tailgating or canceling their seasons outright because of the health crisis, putting a real damper on hotel businesses in the areas.

Nearly $4 billion in commercial mortgage-backed securities on hotels within 5 miles of college football stadiums were at risk as of Sept. 4, according to a report from financial services firm Morningstar. The loans are secured by 141 properties in 51 cities, and the ones most at risk are in rural and suburban areas.

“It’s going to be tough for a lot of these hotels,” said Paul Vaughn, senior vice president of Texas-based hotel consulting firm Source Strategies. Demand will depend on people feeling safe, whether from a vaccine or other steps, and “that’s when the hotels will recover,” said Vaughn.

It’s a similar situation for student housing landlords and retail tenants that rely on college students who are reluctant to move back to campuses across the country as many universities go digital.

Power Five schools generate the most athletic revenue in the NCAA and average significantly higher attendance for football home games. In particular, hotels in Big Ten and SEC towns will probably see a stronger decline this fall “because of their historically high home-game attendance figures and dependence on college town football tourism,” the report said.

The SEC, which starts playing this Saturday, had the highest average attendance among the Power Five with an average of 72,802 attendees last year. SEC schools vary on plans to prevent coronavirus outbreaks, with the University of Alabama planning to operate at 20% capacity and not allowing tailgating and Texas A&M University in College Station, which has the largest SEC stadium with capacity for 102,733 fans, plans to allow 25% capacity while still putting a crimp on loyal alumni flocking to the small town.

College Station hotels struggled during the pandemic and had the lowest hotel occupancy in all of Texas in the second quarter with 26.4%, said Vaughn.

Still, “even something will be better than nothing,” Vaughn said.

But the small SEC markets aren’t the ones with the most troubled debt. Morningstar noted that 57.7% of hotel loan exposure for SEC cities is in Nashville, Tennessee, home to Vanderbilt University, which had the lowest average game attendance last year among Power Five alliances.

The largest hotel loan with CMBS exposure for cities with SEC schools is the 482-room Sheraton Grand Nashville Downtown. It is delinquent on $133 million in debt, which was turned over to special servicing in June, according to Morningstar. The owner of the hotel, JRK Property Holdings out of Los Angeles, did not immediately return a request for comment.

Nashville’s hotel business has struggled because business from corporate meetings and conventions vanished during the pandemic. This time of year is normally prime convention season for hotels in Nashville, not college football games.

Butch Sypridon, chief executive officer of the Nashville Convention and Visitors Corp., said by text that hotels are starting to do better in the city.

“Vandy helps with visiting fans,” Spyridon said. He added that the city has the “best price and access in the SEC.”

Any help is likely to be muted; Vanderbilt is the only SEC team that’s not going to allow any fans into home games, at least through October.

Perhaps the hotel debt under the most pressure among the five conferences is in Austin, home to the University of Texas, which is part of the Big 12 conference. Austin hotels make up 85% of the $699 million in debt that faces risk exposure in Big 12 cities, according to Morningstar.

The Texas state capital’s largest troubled debt is $300 million on Fairmont Austin, a 1,048-room, full-service hotel in downtown about 2 miles from the University of Texas football stadium. That loan went into special servicing in May and was brought current in July but remains in special servicing, the Morningstar report said. The owner of the Fairmont, Manchester Financial Group, did not return requests for comment.

Capacity was limited for the Longhorns home opener Sept. 12 at Darrell K Royal–Texas Memorial Stadium, which is the largest in the Big 12 with seats for about 100,000.

Lodging properties in Austin were already facing performance declines with the cancellation of the South by Southwest tech and film festival, the Formula 1 U.S. Grand Prix and the Austin City Limits Music Festival.

The Big Ten plans to start football games at the end of October after initially postponing the season. The Big Ten’s University of Michigan in Ann Arbor is not allowing spectators, leaving its 107,601-seat stadium, the largest in the country, empty for its first home game Oct. 31.

More than a third of CMBS loans on hotels near Big Ten football stadiums are delinquent, including a $180 million loan backed by the Hilton Minneapolis, according to Morningstar. With loans totaling $469.3 million, though, the Big Ten was the least at risk.

The Pac 12, which now is the sole conference of the five not playing, has the most CMBS hotel loans at risk with more than $1.2 billion, the Morningstar report showed.

Turning unused hotel rooms into temporary student housing could be a viable revenue stream for hotels hurting for business, according to the report.