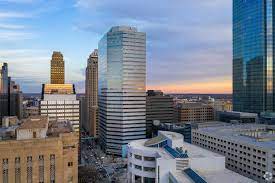 Overall leasing in Oklahoma City’s office sector is now above the average annual levels seen between 2017 and 2019, an impressive landmark that many metropolitan areas across the country have yet to reach.

Oklahoma City’s office sector also bucks another nationwide trend, in that the city is not witnessing the “flight to quality” that has taken hold in so many office markets in the U.S., including neighboring cities like Tulsa, Dallas-Fort Worth or even northwest Arkansas.

In those cities, tenants have used the considerable leverage they have in the post-coronavirus world — and the glut of office available space that has resulted from the rise of remote work — to get better deals on space in new, luxuriously-appointed buildings. By the same token, they are abandoning outmoded office space that may have seemed sufficient before the pandemic began, a trend industry observers have termed the “flight to quality.”

Such has not been the case in the Oklahoma City area, where most lease deals of 2022 have involved office space on the modest side of the spectrum.

Of that inventory, only 12 million square feet could be considered Class A quality, or four- or five-star as CoStar defines it. That’s just 18% of Oklahoma City’s office universe, a much smaller stock than that of peer markets. For instance, the percentage of Class A or four- and five-star office space in San Antonio, Texas stands at 31%. The proportion of high-end space is even higher in Charlotte, North Carolina, where about 42% of the city’s office space can be classified as top-quality.

Much of Oklahoma City’s office stock is several decades old. The lion’s share of office buildings in the city were built in the 1970s and 1980s, accounting for about 40% of all inventory. Meanwhile, those built prior to the 1950s make up about 10% of its office inventory.

Many of these buildings are nearing the end of their life cycle, which would provide developers a unique opportunity to upgrade and renovate them, thus increasing the region’s four- and five-star properties while retaining the buildings’ historic architectural value.

Back to Current News
« Previous