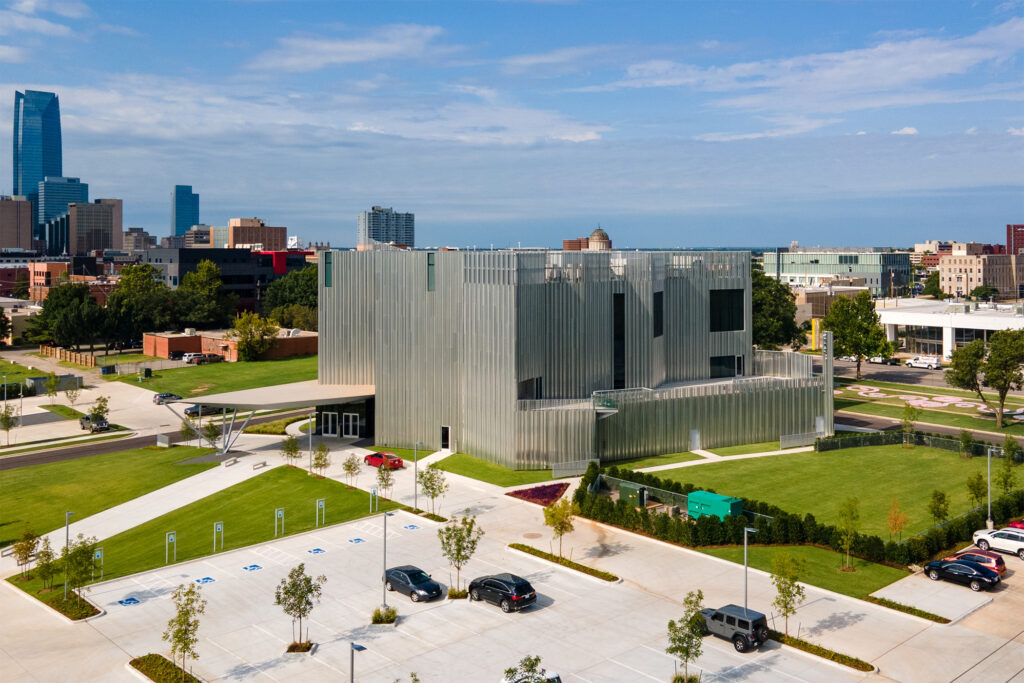 A long-anticipated opening of a new landmark for Oklahoma City has arrived with the Contemporary Arts Center welcoming guests on a limited basis after months of delays because of the pandemic.

Oklahoma Contemporary’s new, nearly $30 million home at 1200 N. Broadway Ave. for the multidisciplinary arts nonprofit group had been scheduled to begin to open in March after 12 years of planning, but the coronavirus and social-distancing mandates forced that start to be postponed.

Now, the center is allowing the public limited access with timed, ticketed entries to allow for 2,400 square feet of space per visitor. Face coverings and social distancing are required.

The center’s inaugural exhibition, “Bright Golden Haze,” is named after the first line in Rodgers and Hammerstein’s iconic musical “Oklahoma!” where a cowboy sings about the morning light in the dawn of Oklahoma’s statehood, according to a statement from the nonprofit.

Designed by Rand Elliott Architects, the new building is expected to become a significant and recognizable landmark for downtown. The structure is the centerpiece of the new, 4.6-acre campus for Oklahoma Contemporary, which plans to relocate from the city’s State Fair Park into the bigger space that will allow for more exhibitions, education, classroom and performance space.

The building has a semi-reflective, luminous facade meant to evoke the ever-changing weather conditions of the city. The facade is made of 16,800 custom-made, extruded aluminum fins, which extend from the ground to the top of the building’s parapet.

“With a focus on arts education, the building is intended to inspire visitors to see art responding to the environment around them,” said architect Rand Elliott in a statement.

The new building was funded by a capital campaign supported by more than 200 donors who gave a total of more than $26 million, according to the center.

The new Oklahoma Contemporary Arts Center is within the emerging Oklahoma City Innovation District, a multidisciplinary hub drawing together some of the state’s biggest industries and employers into a revitalized area east of Downtown meant to foster the city’s entrepreneurial ecosystem.

The new building for Oklahoma Contemporary is expected to be a cultural focal point in the Innovation District.

“Oklahoma City’s cultural landscape has come of age the last two decades, and hardly a week passes without a major new development,” said Oklahoma City Mayor David Holt in a statement. “But the opening of the spectacular new home of Oklahoma Contemporary is on another level. This is a world-class facility, dedicated to art in all its forms, and our region will not be the same after its arrival.”