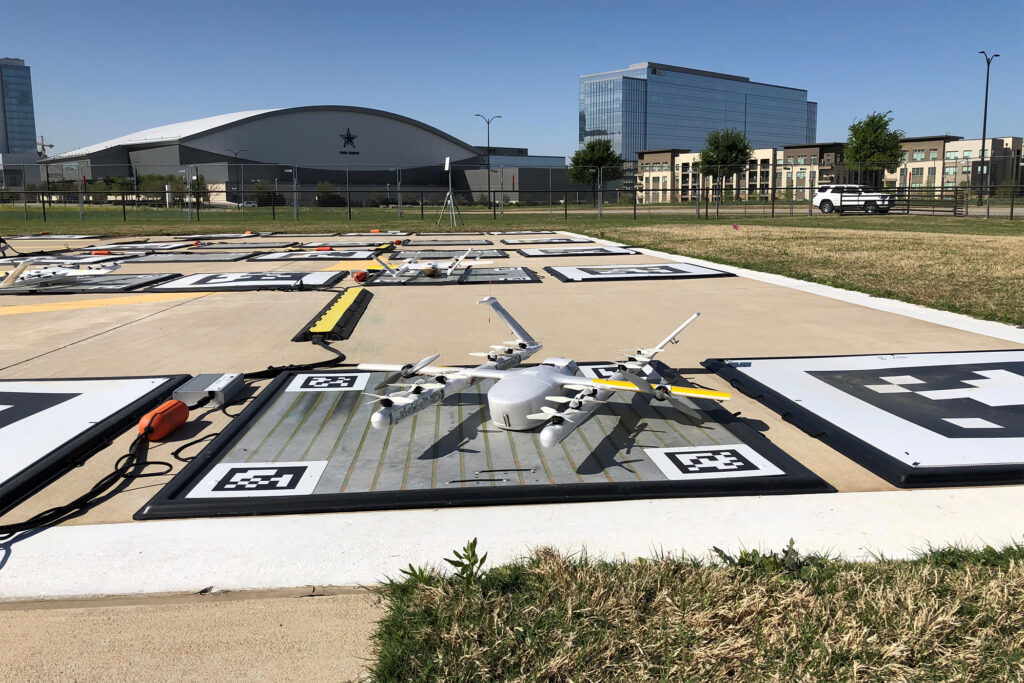 The high-pitched buzzing sound starts just as a drone takes off from a concrete launchpad on its latest mission: deliver ice cream to residents of a fast-growing area near Dallas.

The lightweight drone — called a hummingbird — uses its wingspan of just over 3 feet to deliver up to 3.3 pounds of goods within 4 miles of its home base in Frisco, Texas. Once a customer orders a delivery through an app, the drone leaves its perch atop a charging pad, known as a nest, and hovers about 20 feet off the ground as a worker in a safety vest attaches a slim cardboard container to a specially designed hook. The drone then takes flight, mostly on autopilot but guided by a human pilot who, overseeing multiple drones at once, can be located anywhere in the country.

Wing, a subsidiary of Google parent Alphabet, reached new heights when it launched its first U.S. commercial drone delivery service in a major metropolitan area last month at Frisco Station. So far, Wing can only deliver products from retailers it has signed deals with such as Blue Bell Creameries and Walgreens, and it can only reach residents in two northern suburbs of Dallas-Fort Worth, the nation’s fourth-largest metropolitan area.

But from this early beginning, these new commercial additions to the sky are expected to reshape how U.S. properties are designed, with cargo-carrying drones holding the potential to change stores, office buildings and residential towers by requiring a place to receive delivered goods, similar to how the influx of e-commerce changed the needs of real estate in recent years.

Wing took over a helipad vacated by Uber’s flying taxi unit Elevate, which used the site to test the world’s first air taxis before it was sold by Uber. The helipad is located at the 242-acre, mixed-use Frisco Station developed by Dallas-based Hillwood. The drone delivery hub is Wing’s largest because the helipad was designed for Uber Elevate’s commercial aircraft rather than drones. Frisco Station, about 25 miles north of downtown Dallas, is adjacent to the headquarters and practice facility of the NFL’s Dallas Cowboys.

“This next evolution of delivery is very exciting, with office users and residents telling us they need package delivery,” said Russell Laughlin, an executive vice president at Hillwood. “In a built environment, like Frisco Station, we don’t drive cars like we used to, with many of them being electric and in need of EV-powering stations, and we aren’t going to get deliveries like we have in the past. At some point, if a retail property doesn’t have a drone nest, it could be considered something less than Class A.”

Still, Wing and other drone delivery companies face the technical challenges involved in developing any new type of system and customizing specialized real estate to win government approvals. Changing or differing consumer habits could also pose a challenge for the largest investments in shopping with drones; for example, even though more consumers began using pickup and delivery options for retail during the pandemic, slowing online sales this year show some people prefer to return to shopping at brick-and-mortar sites.

Wing’s first commercial drone deliveries are helping set the pace of retail drone use throughout the country, but the Google affiliate isn’t the only player in this next-generation industry.

Rivals include Amazon’s Prime Air, which has hit some speed bumps in terms of flight costs, and the recent launch of Flytrex, a Tel Aviv, Israel-based startup that began making food deliveries in March in Dallas-Fort Worth through a partnership with the parent company of Chili’s Grill & Bar, Maggiano’s Little Italy and It’s Just Wings.

The drones can deliver pasta and wings to hungry residents of Granbury, Texas, a small city about 38 miles southwest of downtown Fort Worth. Flytrex’s delivery radius is about a mile, smaller than Wing’s, but it plans to eventually reach 2 miles. But Flytrex’s weight threshold is the nascent drone delivery industry’s biggest so far at 6.6 pounds.

Meanwhile, Wing expects to expand its delivery area from Frisco Station to a 6-mile radius and to develop other high-tech nests in the region and in other major U.S. cities.

“We are starting in the suburbs of Dallas-Fort Worth, but we plan to expand in this metro area and beyond this metro area,” Jacob Demmitt, Wing’s lead marketing and communications manager, told CoStar News. The North Texas suburbs are a good place to start because the region has the population density to test the flights, he said, with most of the single-family homes having a backyard or front yard for a drone to deliver a package.

“The people here also really embraced the technology,” Demmitt said. “It’s part of the culture here, being on the cutting edge.”

Flytrex CEO Yariv Bash, who spoke to CoStar News from Tel Aviv, said his company is reaching the end of a yearslong process of getting certifications through the Federal Aviation Administration to operate commercial drone flights, but overcoming the hurdles now could have a big payoff in the years to come.

“We knew it would be a long run rather than a short sprint,” Bash told CoStar News. “We are nearing the end of a five-year process to use these drones for a commercial use and, once we are done with certification, we are good to go on a national scale.”

In the next five years, Bash said, drone delivery could come to a “shopping center near you” with the ability to quickly deliver anything and everything in minutes.

“Why wait for next day if you can get it in 15 minutes or less for the same price? Whether it’s a shirt from the Gap to a cellphone charger, our goal is to get whatever is ordered faster and more affordable to customers,” Bash said, adding it’s difficult to outline the savings compared to traditional delivery methods because it’s like comparing apples to oranges.

Flytrex has been working with Walmart for the past two years on drone test flights in North Carolina, delivering the retailer’s goods to customers from the sky. The company has also been working with a local North Carolina brewery to deliver beers to customers who may be on the sidelines watching a child play sports. And Bash’s team is already working on drone prototypes to increase the weight threshold of a load to 10 pounds.

“We are not aiming to deliver a fridge or a large-screen TV anytime soon, but we want to deliver almost anything you desire, like dinner for your family,” Bash said. The use of delivery drones could “bring back the brick-and-mortar stores front and center” because drone capabilities work best within a few miles of the delivery address, he said.

And the future of drone delivery is still being written because the FAA and others in the industry are watching the results of these first U.S. commercial drone test flights.

“The market opportunity is infinite at this stage,” Bash said.