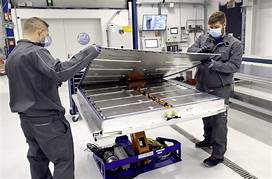 A joint venture between Samsung and Stellantis, the world’s 5th largest automaker behind Toyota, VW, Hyundai & GM, is a multinational automotive manufacturing corporation and formed in 2021 on the basis of a 50-50 cross-border merger between the Italian-American conglomerate Fiat Chrysler Automobiles and the French PSA Group, plan to build an electric vehicle battery factory in Indiana that will employ up to 1,400 workers and become the company’s second such factory in North America.

Construction of the plant is expected to start later this year, with the facility expected to open in early 2025 in the city about 60 miles north of Indianapolis.

The venture’s investment in the plant could gradually increase to as much as $3.1 billion, Mark Stewart, the chief operating officer of Stellantis North America.

Samsung will use its PRiMX technology to produce electric vehicle battery cells and modules for the North American market.

Stellantis said it in 2020 that it would build two electric vehicle battery factories in North America. The Indiana plant fulfills the promise of a second plant. The first plant was a $4.1 billion project built in Windsor, Canada under a joint venture with LG Energy Solutions of South Korea. That plant will employ about 2,500 people.

“Today’s announcement is another step toward positioning Indiana as a leader in the future of mobilty, battery technology and clean energy,” Indiana Gov. Eric Holcomb said in a statement.

Indiana is offering the planned electric battery factory an incentive package of up to about $186.5 million in conditional tax credits, training grants and investments, including funding that would offset the costs of the plant’s infrastructure.