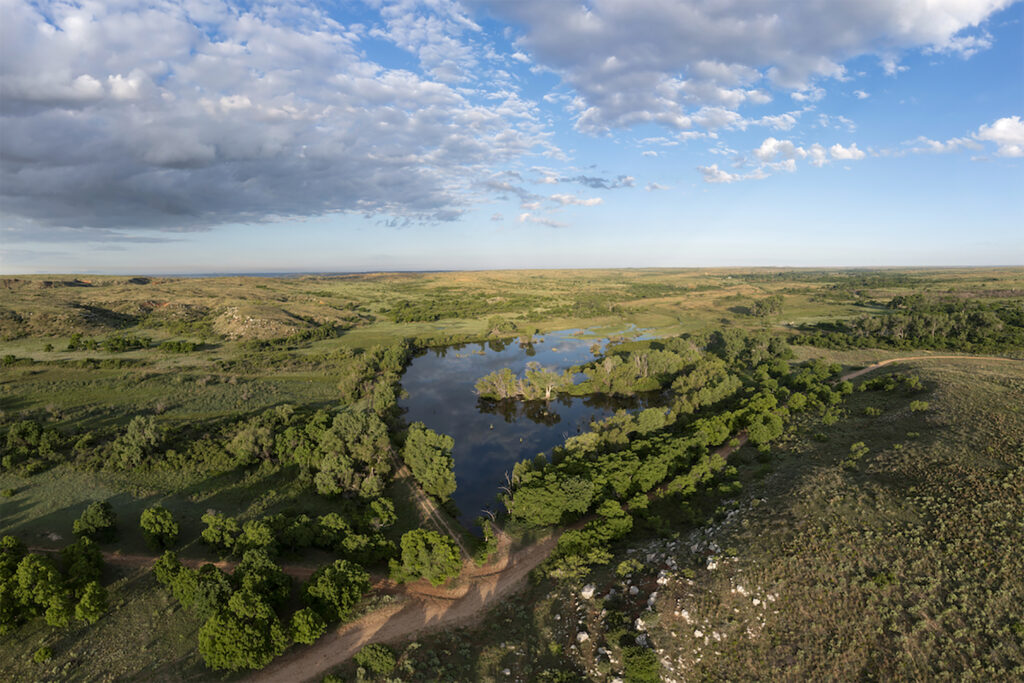 Massive Ranch in the Texas Panhandle With Mineral Rights Gets Price Tag of $200 million.

A massive ranch in the Texas Panhandle has a price tag for the first time in more than a century, giving potential buyers with $200 million a chance to also buy a percentage of the ranch’s mineral rights.

The 80,000-acre working cattle ranch and wildlife habitat, called the Turkey Track Ranch, has been on the market since May when its owners, the Coble and Whittenburg ranching family, unveiled plans to sell the acreage after owning the land for more than a century.

Turkey Track Ranch, which sits about 270 miles west of Oklahoma City in the West Texas Panhandle, has already received attention from potential national and international buyers, said Bernie Uechtritz, the founder of Dallas-based Icon Global Group, who is marketing the ranch.

The newly unveiled listing price puts a value on something that hasn’t been valued in 120 years, said Uechtritz, who is known in the land sales business for marketing and selling the 535,000-acre Waggoner Ranch in North Texas for $725 million to Los Angeles Rams owner Stan Kroenke about five years ago.

With a lot of the great Texas ranches like the Waggoner Ranch either being sold or put under contract in the past few years, Uechtritz said the Turkey Track Ranch is one of the last great legacy ranches to be listed.

Another Texas Panhandle ranch called Mesa Vista Ranch, owned by the family of the late oil tycoon T. Boone Pickens, is under contract and scheduled to close before the end of the year, said Monte Lyons, the broker marketing Mesa Vista Ranch.

“The Turkey Track Ranch is a really good ranch,” said Lyons. “Ranch inventory in most of the state is pretty light with not so much available in the Panhandle. Land there is tightly held and what has come available has moved.”

Capital Farm Credit, part of the Farm Credit System, is ready to underwrite and finance Turkey Track Ranch for potential buyers. Capital Farm Credit’s chief lending officer, Phil Peabody, said the appraisal and lending team recently toured the ranch by ground and air and that the wildlife, livestock and resources on the property are “best in class,” according to a statement.

The historic ranch is being offered for sale with a 40% stake of mineral rights ownership and revenue from existing oil and gas wells, with the potential for developing more wells. The ranch’s wind and solar rights, along with agricultural and domestic water assets, intellectual property, operating equipment, name and brand, are also included in the sale.

The ranch has 26 miles of Canadian River frontage access, including seven creeks and multiple reservoirs, springs and lakes.

Before the Turkey Track Ranch was a ranch, it was hallowed ground for Native Americans, early settlers and soldiers, with two historic battles taking place on the site in 1864 and 1874. Uechtritz said that history isn’t something that can be easily purchased.

“History is not something you can buy off the shelf and bolt on,” Uechtritz said. “You either have it or you don’t.”

The owners of the ranch said they decided to sell it because of “our family’s increasing numbers and geographical distances,” with them recognizing it was “time to find a new steward for this historic holding,” according to a statement.